With a rich history in Greek mythology, it’s said that the aster was created by the tears of the Greek goddess, Astrea. One day, she was so upset by how few stars there were in the dark sky, that she began to cry. As she wept, her tears fell to the ground and turned into star-shaped aster flowers Thus, the flower was named after her, with aster meaning star.

The roots of asters were used in soups and young leaves were cooked lightly and used as greens. The Iroquois people combined aster with bloodroot and other medicinal plants to make a laxative. The Ojibwa used an infusion of aster root topically to aid with headaches. 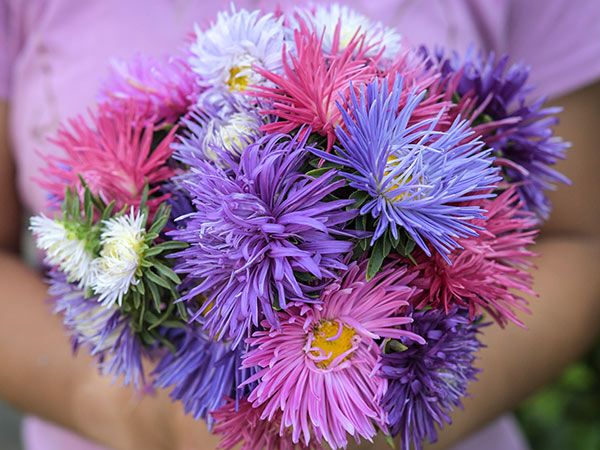 The beautiful fall flower stands for wisdom, faith and valor. It is named after the Greek word for “Star” due to its blooms resembling a star. The Aster flower blooms in pink, red, white, lilac and mauve. Nowadays when sending a bouquet with the aster flower, the message “Take Care of Yourself For Me” is implied. It conveys deep emotional love and affection. The different colors of the aster also symbolize different things.

How to care for asters in your home:

Cut any leaves or foliage that will fall below the water level. This will keep the asters fresh for a longer period of time and will give them a cleaner appearance. It will avoid rotten leaves and harmful bacteria in the water.

Cut flower stems with a clean and sharp knife taking off one inch.

Rinse the stems thoroughly before placing them in a vase, again to avoid any harmful bacteria from seeping in the water.

Place the vase in a cool area and out of direct sunlight.