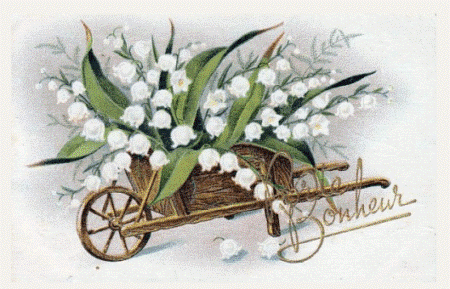 May birth flower is the lily of the valley. According to ancient mythology, the May birthday flower was under the protection of the son of the goddess Maia. For the Greeks this was Hermes and for the Romans it was Mercury. Another legend tells of a lily of the valley who fell in love with a nightingale’s singing, and only bloomed when the bird returned to the woods in May. The lily of the valley is mentioned 15 times in the Bible. Over the centuries, the lily of the valley has developed many meanings. The fragrant white flowers are often associated with traditional feminine values such as motherhood, purity, chastity and sweetness.

LILY OF THE VALLEY IN HISTORY

In France, lily of the valley (or muguet in French) has been given as a gift for centuries. Legend has it that the custom began in the mid 1500s. This is when, on May 1, 1561, King Charles IX received a sprig of the tiny flower as a token of good luck.

In the early 20th century in France, men often gave bouquets of lilies of the valley as tokens of affection. They presented their gifts, in accordance with tradition, on the first of May. In their absence, they sent romantic postcards featuring pictures of the flower accompanied by wishes of good luck. The card-sending ritual is still practiced today.

Other types of lilies are also considered to be May flowers. They were so revered by the ancient Greeks that they believed they sprouted from the milk of Hera, the queen of the gods. Long tied to the Virgin Mary, the white Madonna lily represents virtue, while the lily of the valley conveys sweetness and humility. In the language of flowers, this May birth flower expresses purity of heart, majesty and honor.

Do you have a May birthday, or know someone that does? Check out JLF Seasonal Collection to find the perfect arrangement with Lilies and make your flowers even more special!!